My Warlock (Nessalux) currently has her staff transmogrified to the Vengeful Gladiators War Staff.

I just love the way it looks.

Because I’m a total dork, and it reminds me of Darth Mauls double ended light sabre.

I also like it because it doesn’t have a million spiky, twisty, pointy bits coming off it in every direction. I definitely prefer a look that is more *clean* than most of the current epic gear you see around Azeroth.

Here’s what my Warlock is wearing right now. All very sleek, uncomplicated stuff.

For those of you with transmogging interests the items my gear is mogged to are as follows: (much of it is easily accessible gear – straight from the tailoring profession).

Back: Cloak of Seething Hatred

It’s not that I wouldn’t like to be a total show off, of course.

In fact I would like nothing more than to be able to enter a dungeon and instead of standing around saying, “hi” “hiya” “hi all” or some variation thereof and do THIS.

For you moglodytes out there – there is an identical model in blue which is a little trickier to get. It’s called the Apostle of Argus which can be looted from Archimonde in the 25 man raid instance, Hyjal Summit. 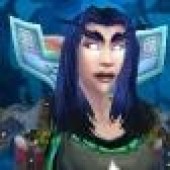 Kri’tak, Imperial Sceptre of the Swarm

Transmogrification on my Blood Elf Warlock